The politics of brotherhood: fraught with emotional landmines, resentments and arbitrary rules, yet full of unquestioning loyalty and fiercely protective (if sometimes reluctant) love. Rules of Summer is simultaneously a pictorial paean to the fact that we sometimes behave in the most destructive ways with the people we are the closest to, and an advocate for the principle that “where there is love, there is forgiveness”. All of this is tangled up amid a backdrop of a fantasy world populated by two brothers and a host of threatening creatures (it’s the brothers against the world) waiting to be unpicked by young readers (and their adults). Sound heavy? Well, it is. Sort of. But it is also full of magic and humour and is, above all, wonder-inducing. 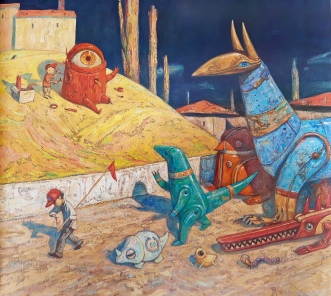 The book is written from the point of view of the younger brother. Simple lines of text are juxtaposed with deeply complex, fantastical imagery. The boy opens by telling us “This is what I learned last summer”. He spends the rest of the book outlining the rules his older brother puts in place for him (“Never drop your jar”, “Never eat the last olive at a party”, “Never step on a snail”). The accompanying pictures show the consequences of not heeding those rules. Tension and animosity builds (this hostility is represented in the artwork by the presence of a single black crow) until it reaches breaking point and the boys end up in a brawl. The older brother is crowned victorious by the crows, who have now amassed. The little brother is banished from his brother’s presence and affections. As the brothers drift further and further from each other (literally and figuratively) the images become progressively bleak, cold and depopulated, as the number of crows grows inversely (“Never wait for an apology”). 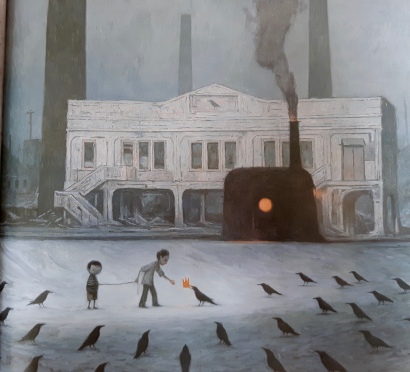 There is hope yet, though, as big brother turns up with bolt cutters to break the chains of silence and hurt, and bring his little brother home. In the final scenes, together the boys climb over the wall they have built between themselves and the feast of spoils that summer has to offer.

In the end, we find the boys together, eating popcorn on the sofa, while watching TV. The floor is scattered with books. The walls are papered with drawings of all the mysterious and wonderful creatures they have dreamed up. Through the closed window we see a single crow in distant flight, firmly shut out, for now.

Unlike anything I had ever seen before, this book became an instant favourite in our house. Some reviewers recommend this book for older children only. I disagree. Let your little ones look and question, and look some more.