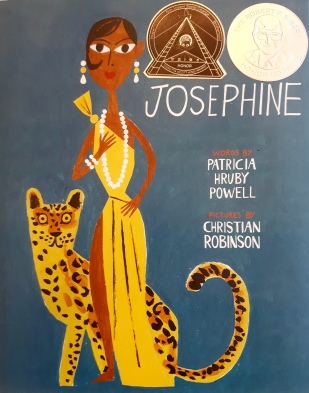 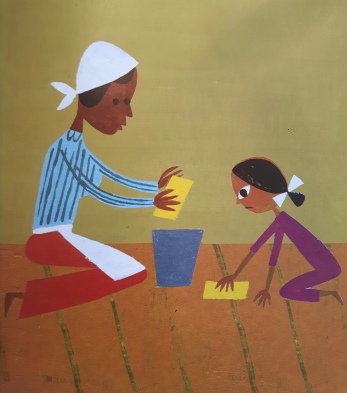 “Still I’ll rise”. These words of Dr Angelou’s (notably spoken this past Sunday by Serena Williams after the world watched her win a 22nd (!) Grand Slam title) could not be a more fitting place to begin. Born into abject poverty in an America deeply divided along racial lines “where white folk threatened colored folk, where whites lived apart, segregated from colored, where signs for one latrine read WHITE ladies and for another, COLORED women, here a white person wouldn’t sell you a cup of coffee. Because you were a NEGRO,” Josephine Baker set out to “CONQUER THE WORLD and show ’em all.” And that is just what she did.

Patricia Hruby Powell takes us by the hand and swings us through the acts of Josephine’s life. She plays with language and typeface, dipping us deeply into Josephine’s dichotomous being — at once playful and fierce — externally mugging, internally, volcanically seething (“Does my sexiness upset you? Does it come as a surprise that I dance like I’ve got diamonds at the meeting of my thighs?…I rise”).

We snake with Josephine from the “honky-tonk town” of her birth, Saint Louis, Missouri, down through the deep South, up to the Big Apple and across the sea, until the curtain finally drops in her beloved City of Light. We learn that a love of music and dance was lodged in Josephine’s being from an early age by her mother, and that witnessing extreme racism and social injustice from that same early age forged Josephine’s “volcanic core”. “Anger heated and boiled into steam, pressing HOT in a place DEEP IN HER SOUL”. Powell repeatedly turns the spotlight on Josephine’s ability to use humour and the physicality of dance as an outlet, “She’d let the steam out in little poofs. POOF! A funny face. That used to be fear. POOF! She’d mock a gesture. That used to be anger. She’d turn it into dance”. Josephine battles all odds to become a darling of the European stage and later, a sensation in America, too (but not before walking her pet cheetah down the Champs-Elysees, becoming a stunt pilot, spying for France during the war and adopting a “rainbow tribe” of twelve children from around the world — “I rise. I rise. I rise”). 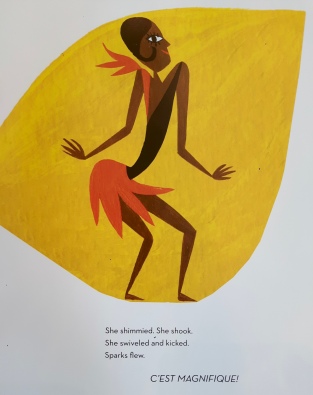 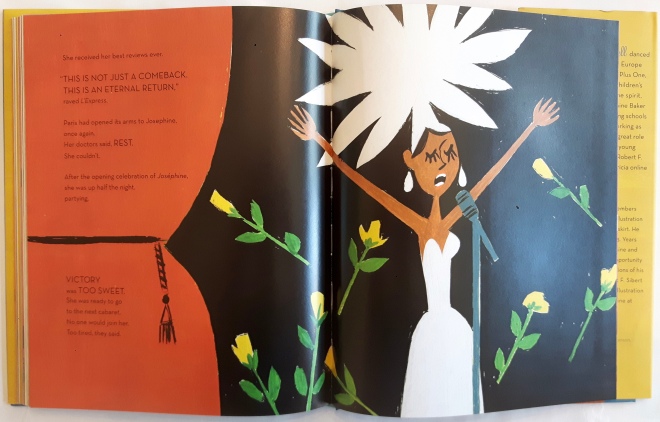 Christian Robinson’s (Coretta Scott King Illustration Award- winning) artwork brings Josephine to life. The simplicity of his paintings, bringing to mind great Black American artists Jacob Lawrence (his colour palate rich in black, burnt umber, cadmium orange and yellow) and Bill Traylor (folksy form), never undermines their strength and vivacity. His illustrations convey clear messages about difficult historical happenings (so very relevant to conversations being had between parents and children particularly after last week’s violence in America). Robinson has said in interviews he can remember feeling inspired the first time he saw Paul Colin’s iconic illustration of Josephine dancing in a banana skirt when he was just thirteen. That feeling has clearly not left him; he treats his subject with such love.

I started this review with a mention of Serena Williams and I will end with Serena, who in a post-Wimbledon interview said words that could have come straight out of the mouth of Josephine, “I didn’t come from any money or anything, but I did have a dream and I did have hope. That’s really all you need.” This is the right time to read this book with your children. 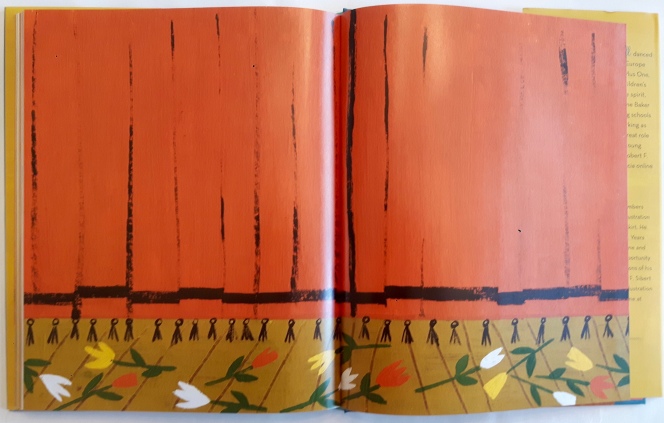 You may write me down in history
With your bitter, twisted lies,
You may tread me in the very dirt
But still, like dust, I’ll rise.

Does my sassiness upset you?
Why are you beset with gloom?
‘Cause I walk like I’ve got oil wells
Pumping in my living room.

Did you want to see me broken?
Bowed head and lowered eyes?
Shoulders falling down like teardrops.
Weakened by my soulful cries.

Does my haughtiness offend you?
Don’t you take it awful hard
‘Cause I laugh like I’ve got gold mines
Diggin’ in my own back yard.

Does my sexiness upset you?
Does it come as a surprise
That I dance like I’ve got diamonds
At the meeting of my thighs?

Out of the huts of history’s shame
I rise
Up from a past that’s rooted in pain
I rise
I’m a black ocean, leaping and wide,
Welling and swelling I bear in the tide.
Leaving behind nights of terror and fear
I rise
Into a daybreak that’s wondrously clear
I rise
Bringing the gifts that my ancestors gave,
I am the dream and the hope of the slave.
I rise
I rise
I rise.