Now seems to be a time when a lot of people are thinking about the kind of world they would like to live in. Many people who would normally keep themselves to themselves have felt utterly compelled to stand up and say,  “Black lives matter” or “Never Trump” or even (in rather larger numbers than, I admit, I ever expected) “We do not want to remain a part of the European Union”. Whether it is for personal benefit or for that of their children or their children’s children, people are attempting to define their world and are demanding to be heard.

So, what if you had the option to start from scratch? Where would you begin? A World of Your Own begins with Laura, a little girl who looks at what already exists and then goes about making things “more interesting”. Let’s just say slides feature heavily (as do cats). In Laura’s world things aren’t always what they seem, “Take, for example, my office supply shop, which actually sells…shoes for superheroes!”. With each step little Laura takes in creating her world, author/illustrator, Laura Carlin, offers children instructions for creating a world of their own. Importantly, the character Laura gets kids thinking, “Draw an outline of your house. Now draw where you would like to live. What’s your house made of? Does it have walls or windows? How do you get in and out?”. 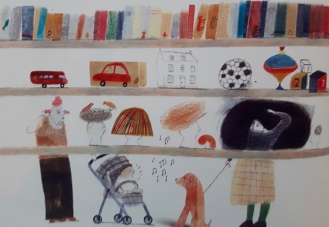 Carlin doesn’t just focus on architecture. Through her arresting imagery, she asks children to think about what lessons should be taught at their school, how they can improve transport, and how people should be represented. With nothing more needed than “a piece of paper, some pencils, and a few everyday objects” Carlin gives littles endless power to shape and create. Her most moving message, though, is that every new day is another opportunity to “start again and make a whole new world”. 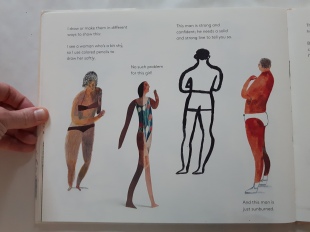